How to use R6 Analyst’s R6 Smart Ban?

The R6 Smart Ban feature is used in-game, at the start of a match which contains a Banning Phase. This article will show you how to make the most out of R6 Smart Ban step-by-step!

Don’t want to read? Watch this short tutorial video instead!

You can press the minimize button, or the hotkey (default: CTRL+B) to hide the screen until it’s needed.

Once a Ranked, Unranked, or Custom match starts, the app will automatically appear again. After a brief calculation period, the Smart Bans are shown. 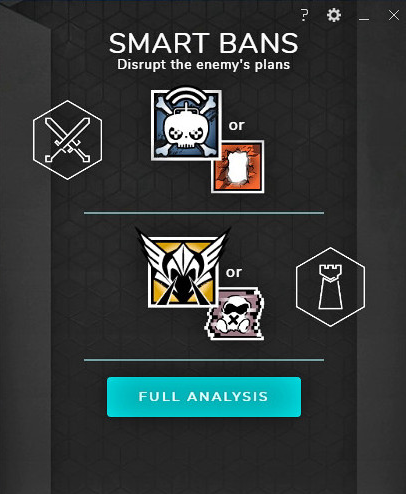 These are the top two recommended Operator Bans for Attack and Defence. This recommendation is the result of an algorithm that takes into account the Operator preferences of the enemy team, as well as your own team. The goal is to prevent your opponents from running their 'default' strategies, whilst your team still has theirs available, by Banning Operators that the enemy team uses often, but your team rarely uses.

You can hover your mouse over the Operator Icons to get team average statistics on each Operator.

The right-most side of the Panel shows the Target Bans.

These are Operator Bans that are designed to have the largest impact on the playstyle of a single enemy player. The text below the Operator icon explains why this may be a good Operator to Target Ban. You can hover over the Operator icon to see the average team statistics for this Operator.

The middle section of the Panel shows the Favoured Operators per player in this match. Hover over the Operator icons to see the statistics for this Operator, for this player specifically. 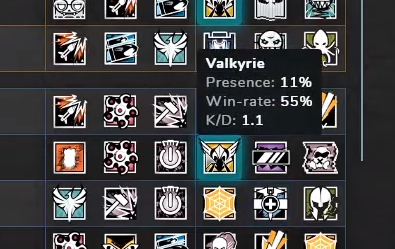 The left-most section of the R6 Smart Ban Panel shows the R6SB Score Graph. This is a visual representation of all the Operators in the game, and their value to both teams in this match. 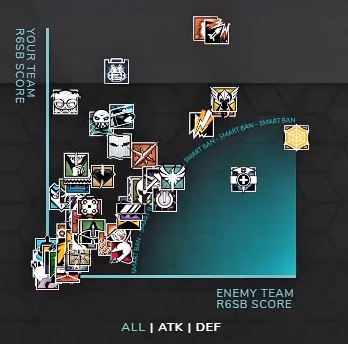 The higher up in the graph an Operator is situated, the more value it provides for your team.

The more to the right an Operator is situated, the more value it provides for the enemy team.

Thus, Operators in the top left corner are a really bad idea to ban, as they provide a lot of value to your team, whilst the enemy team rarely ever uses them.

Operators in the top right corner are valuable to both teams. Only ban these Operators if you have a specific idea in mind on how to play this match without that Operator.

Operators in the bottom right, the highlighted corner of the graph, are the best Operators to ban. They provide a lot of value to the enemy team, whilst your team rarely uses them.

The buttons below the graph allow you to filter the graph to show only the Attacking or Defending Operators.

Join the Discord server to ask questions or give suggestions.