What is Match Bar?

Match Bar is an in-game Overwolf Application for Playerunknown's Battlegrounds (PUBG) that follows you in your game sessions and collects information about your progression throughout your matches.

It gives you back the data as detailed statistics, seasonal data and high-scores to beat.

Its goal is to help you become the best you can be by giving a game by game timeline to look at during and after the game to see how you did at certain points and where you could improve.

When you first start the game with Match Bar running you'll be welcomed by an orange bar at the top of the screen that measures how far you have made it into the current round (based on average match times for each map).

Important events will be marked down on the timeline during the match; Head-shots, Knockdowns, Kills, when you yourself get knocked down and/or killed, it will tell you when you made it to Top 10 with your final position and make it clear when you won the game.

It will also show you the total amount of Kills and Kill per Death on the left side of the screen below the timeline.
This can be re-positioned in the settings.

Any time during or after the match you can expand the timeline by clicking on it or using (default) CTRL+K key-bind. This will show more in-depth statistics about your game session and current match.

Details Graph will present you with two lines, Damage per Kill (DPK) and Kills per Minute (KPM). We plan to add more to this graph when new features are implemented into Overwolf's connection to PUBG. KPM updates on a 30-second interval, and DPK becomes available when you Die/Win. If all your kills/damage come from the end game then you might want to test out dropping in more hot areas during the start.

Season Stats are shown above the graph with statistics from the current active Season. You can select the game mode you want to get seasonal data from in the Settings, as a default it will show a summary of all the game modes.

Highest gives you the highest Kills/head-shots or damage you have done in a single match. They can be from different matches, so if you want to beat your head-shot high-score you don't need to beat your Kills high-score.

Session will track your average damage / round, total damage and your wins. (with % based on rounds played)
ADR and damage updates when you die / win / exit to lobby / start a new match. 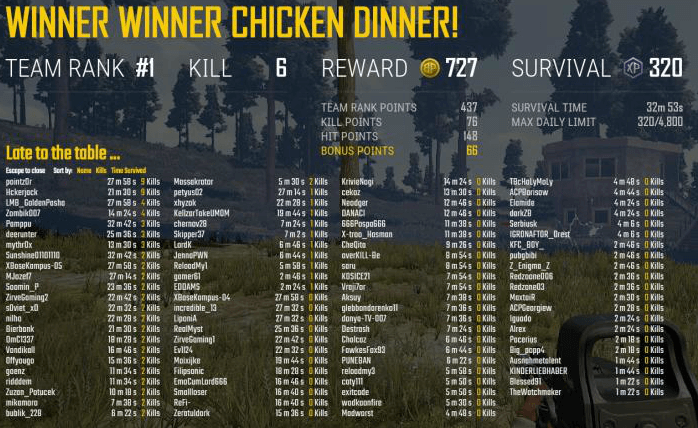 At the end of each round, if you die or win, we have implemented a scoreboard that will show you all the people who died before you. You can sort the list based on name, kills and time survived. Maybe you find one of your friends or someone famous that you made it further than? The scoreboard disappears when you press escape, click exit to lobby or spectate. 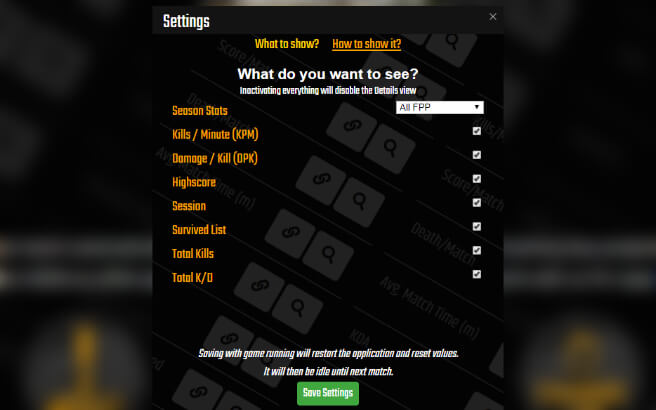 Most of the features in the application can be changed in our settings, you can disable everything you don't want to see (except for the timeline itself) and also select between a few predefined themes that we will expand into more as the application grows.